The "Gypsy Chickens" Of Key West 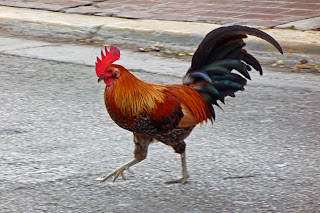 As you begin to wander around Key West, you will continuously see roosters and chickens walking around freely.  On my first trip, this struck me as odd but with KW having a Caribbean feel, not necessarily out of the ordinary. 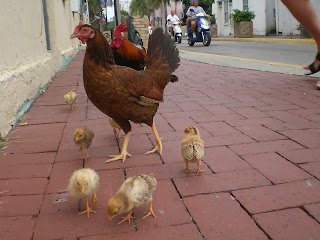 I have heard several versions of why there are chickens roaming free.  The initial version is as follows:  People in earlier times migrated to Key West and because of it's isolation from food sources, they brought their own chickens with them, providing eggs, meat and of course reproduction of the species.  As Key West became more connected to the rest of the world and with the advent of local markets and supermarkets carrying these products, some people quit raising these chickens and they were more or less released.  No longer being fed by their owners, the chickens were able to survive off of the native insects, lizards, scorpions and worms around town. It is said that the chickens have helped to minimize cockroaches in tropical Key West.

A more detailed version that I have heard and read about has to do with cockfighting.  The following from keywestroad-trip blog is as follows:


During the mid-1800's, chickens were big business in Cuba. Breeders purchased varieties of Filipino Fowl from Spain. They created their own breed called 'Cubalaya'. The size and aggressiveness made them perfect for cock fighting.

By 1860, Cubans began to move to Key West during the Ten Years' War and unfortunately brought their love for cock fighting with them. A large amount of Cubans followed, drawn by the cigar industry, bringing their chickens with them. By 1890, more than half of Key West's population was of Cuban  origin.

Luckily, the southernmost city outlawed cockfighting in 1970's, putting the Cubalaya chickens out of business, and out on the streets of Key West. Domestic chickens on the island were losing their homes at the same time when their owners moved away. Now the roosters & chickens were left to roam free, and nature took its course. So, some forty years later, we now have what we call 'Gypsy Chickens'. Like in the 1970's, they are still protected, and make Key West the truly unique place that it is!

And while the chickens make Key West a unique place, some of the locals are not as happy with them as this tourist.  Over a period of time, chickens roaming freely and "letting nature take its course" can make for a lot of chickens.  The following is taken from Sarah Goodwin-Nguyen's blog concerning the "gypsy chickens":

Key West's city government, beset by calls from disgruntled locals, have tried several times to "downsize" the chicken population.  In 2004, the city hired local man, Armando Parra, a barber and self taught bird catcher, to serve as "chicken catcher".  The birds were supposed to be "relocated" to a free range farm in Miami-Dade.  Amid speculation that the birds were secretly being killed, local pro-chicken factions began tampering with traps and Parra was dropped from the city payroll.  In 2008, Assistant City Manager, John Jones, made some comments to the local paper urging fed-up locals to "humanely" break the chickens necks, outraging animal lovers.

You can't make this stuff up!  Nguyen continues with the current Key West solution to the "Gypsy chicken":

The City has formed a symbiotic relationship with the Key West Wildlife Center.  In exchange for financial aid, the KWWC, which aids in the rescue and rehabilitation of local birds and other wildlife, serves as a holding center for "nuisance" Gypsy chickens that have been trapped and brought in (traps can be borrowed from the center for a deposit).  The birds are adopted out to people outside of the Keys, who must sign an agreement stating that the birds are for pets and not meat.  Adopted chickens come with a signed letter from the City Mayor attesting to their authentic breeding as "Key West Gypsy Chickens".

As you can see, the Key West Gypsy Chicken is very much a part of Key West.  A colorful part that sets it apart from other destinations.

HURRICANE IRMA, 9/10/2017 update:  Earlier this morning, Hurricane Irma passed through Key West.  I know there is great concern for the Gypsy Chickens.  The following link shows a very small rescue of some of the chickens that were taken from the island and will be returned. www.miamiherald.com/news/nation-world/national/article171996022.html


**I am an avid tourist of Key West, FL. The purpose of my blog, Southernmost Point, is to give an honest observation from a tourist perspective, not a "Chamber of Commerce", merchants or citizens perspective. I will give honest and helpful information.

Posted by Ricky Nations at 3:50 PM